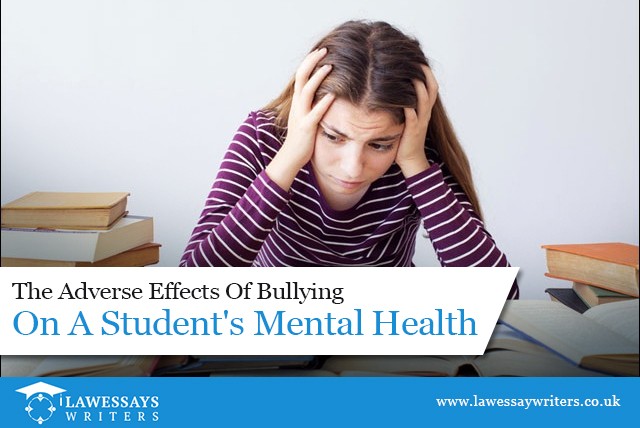 The Adverse Effects of Bullying on a Student’s Mental Health

One of the most common problems students face in High School and college is bullying. Once a student is intimidated by a bully, their downfall starts as the bully takes strength from the victim’s fright. It becomes challenging for the student to report the bully to the teacher or the parents because of the threats and this is why the practice is still prevalent in schools today.

Bullying leaves a lasting impact on the student’s academics and self-esteem. The victim either tries to avoid school or starts to lose interest in all the things they used to enjoy. Family life, relationships, social life, academics, sports, everything is affected.

The most common form of bullying experienced by students is physical bullying. Physical bullies are bigger, aggressive, and stronger. They project their anger and authority by hitting, kicking, shoving, punching, and slapping the victim.

The bully is careful to victimize the student in such a way that the victim does not report to anyone. Many times the student does report a bully but the matter is not taken too seriously without concrete evidence and proof. It is shrugged off as a casual fight among peers.

This form of bullying is the surest way for a student to lose their self-esteem. There is mostly no proof of this abuse. Verbal bullying renders the victim into greater hopelessness because the words hurt more than physical abuse. The victim may get bullied for reasons such as getting law essay help or doing poorly in school.

Cyberbullying has now become more common due to technological advancements. A bully may embarrass the student on their social media by posting hurtful comments or posting images that can destroy the student’s reputation.

This type of bullying revolves around the bully hurling abusive remarks, making vulgar gestures, or touching the victim in a way that would make them uncomfortable. This form of bullying is targeted more towards girls. Victims should under no circumstance bear this form of bullying and should report the bully at once to the authorities.

Prejudicial bullying is when people get bullied due to their different religions, races, or sexual orientation. This form of bullying is aimed at students who belong to a minority group. Students in school come from diverse religious backgrounds and they are fiercely protective of their customs, traditions, and religion. Any kind of abuse against what they hold dear can spark antagonism. The bully knows where it hurts most and takes advantage of the vulnerability.

How Bullying Affects A Student?

Dropping Out From School Or College

One of the most common reasons why academic institutions are facing a higher dropout rate is due to bullying. When the bullying gets out of hand and the victim feels there is no other way out, they decide to drop out of school or college.

Tarnishes Their Self-Esteem And Confidence

No matter how smart and accomplished a student is, all their self-esteem and confidence gets shattered due to the hurtful words of a bully. Their academic achievements mean nothing because they are not strong enough to face the bully. They have become accustomed to the habit of being punished by the bully. The student starts to believe that they are a loser. Building back their self-esteem becomes an even harder task for the victim and they start to get used to the hatred.

Destroys The Ability To Trust

When the student sees that the bully can persecute them despite someone coming to the rescue, the victim starts to form a mistrust for other people. The student may try to complain but without anyone making a strong effort to help them may make the bully stronger and the victim weaker and more defeated. The victim’s change in behaviour may also not have an impact on parents and teachers.

In fact, he may be blamed for his change in behaviour and lack of academic success without trying to understand the reason behind it. The student may start to lose confidence and reliance on the school system. They may feel that they can no longer put their faith and trust in a figure of authority, and this may further increase their helplessness.

Bullying can negatively impact a student. It can change their character drastically and might even change the sweet nature of the young student into becoming a bully themselves. In severe cases, bullying may even lead to suicide. For the bully himself, they might grow with the absolute confidence of performing various acts of bullying and vandalizing without any fear.

Why using short sentences is important for improved writing skills?

How Different learning styles can impact in your grades?

Four tips for adding an attention-grabbing hook in your writing